Congratulations to the 2022 APSE Award Nominees & Winners! Highlighting individuals, organizations, and businesses nationwide for their efforts in Employment First. 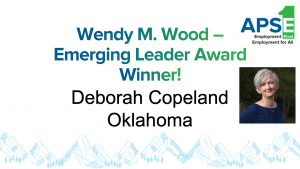 The Wendy M. Wood Award was established to recognize emerging leaders who are developing a vision and creating action toward the full inclusion of citizens with disabilities in our society.

As Oklahoma moves closer to the phase out of the use of 14c certificates, Deborah Copeland has taken the initiative to pave the way forward to competitive integrated employment (CIE) across the state. As CEO of DRTC, Deborah initiated the conversation internally prior to reaching out to state leaders and other agencies. She quickly discovered there was little to no conversation about the state’s plan to shift away from the 14c model. Deborah formed a state-wide coalition of state agencies and leaders, provider agencies, higher education, as well as state and national organizations to focus on the transition to CIE.

Deborah is a forward-thinking leader, focused on systems and service improvement that benefit those trained, employed or served through DRTC, and beyond. As more states have taken steps to eliminate subminimum wages paid to people with disabilities, Deborah has embraced the challenges associated with such a monumental shift from the status quo. She knew there would be some adversity as families reimagine what life could look like for the individuals, but she also knew the rewards in changing the system. Rather than looking at the negative, Deborah leads with a positive attitude in finding ways to change our own business model making the agency more inclusive of the people we serve. She has developed creative plans to get families involved by offering opportunities for education and support through the transition. Knowing that not everyone will want to work in the community, she is changing systems to allow community involvement in other ways such as civic activities. Deborah Copeland is willing to take a risk because she knows it will better the opportunities for all people with disabilities. 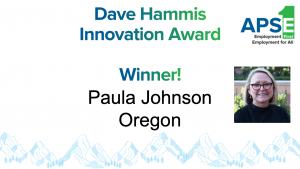 To honor Dave’s contributions to APSE and Employment First, this award is offered to individuals or organizations who demonstrate innovation in the area of technology, customized strategies, and/or self-employment for individuals with significant disabilities. Dave Hammis was an incredible innovator in the field of community-based and customized employment. His creativity and fresh approach to supporting people in inclusive workplaces--- whether at a business or through self-employment---inspired many of us to see beyond the realities of what we thought possible.

The 2022 Dave Hammis Award goes to… Paula Johnson, of Oregon.

Paula exemplifies and honors Dave’s contributions to APSE and Employment First. Paula is offered this award as she has demonstrated innovation throughout her career.

In the early days of her career, her colleagues, friends and associates remember that in the 1980s when customized employment was so new, (i.e. definition of supported employment happened in 1986) Paula worked at University of Oregon and at Olympus in South Seattle in some of the earliest sheltered workshop settings demonstrating that people with the most significant disabilities could do complex tasks with good teaching techniques. She was later on the forefront of getting people community jobs. She went to USF and worked on broad policy issues nationally.

Paula has had a passion for employment for people with disabilities for over 30 years and has experience in job development, job analysis, career planning, staff training, marketing and management. During her nine-year tenure at The University of San Francisco, McLaren School of Business, she directed California’s Supported Employment statewide training projects and led the California Corporate Initiative. When

She is the former national Director of Best Buddies Jobs and led the expansion of employment programs across the US and Latin America. She has been an active member of The Association of People Supporting Employment First (APSE) for many years, which has included serving as the President of the APSE Foundation from 2011 to 2014, leading the development of the Oregon APSE Chapter, and serving as the Treasurer of Oregon APSE. She also serves on the Board of Directors at Wise.

"In short,” says Mary Strehlow, “she was a jack of all trades." 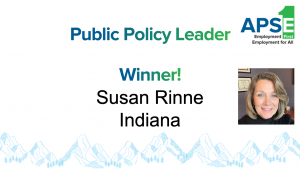 The Public Policy Award was created to distinguish an individual who has excelled in advocacy work around Employment First. A Public Policy Leader is someone who inspires others to make a difference by engaging with elected officials and key stakeholders in discussions to promote policies that support the mission of Employment First.

Susan’s serves as the Co-Director of the Indiana Work to Include Coalition. She has been the most influential person in the state to advance our Employment First legislation, state plan, and implementation. Susan works tirelessly to collaborate with legislators and all key stakeholders in Indiana and externally, including personal collaboration with the Lt. Governor and staff to advance the State as Model. Susan advocated directly with legislators to pass an Employment First law in 2017, and was instrumental in more recent legislation to reform MED works to make it easier to access for workers with disabilities. 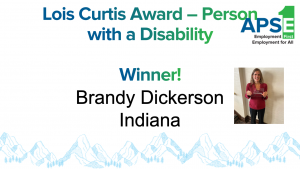 The Louis Curtis Award was created to recognize an individual’s personal achievement in advocating for inclusive, individualized, community-based employment and/or independent living. Lois Curtis paved the way for people with disabilities to live in their own communities while receiving the services they need after spending 18 years living in an institution. Lois Curtis and Elaine Wilson brought a case that rose to the level of the Supreme Court and the court decided that "unjustified isolation" of a person with a disability is a form of discrimination under Title II of the ADA. This is known as the Olmstead Decision.

Brandy is a strong proponent of equitable employment and full social inclusion for individuals with disabilities. When Brandy isn’t working one of her three jobs, or fulfilling her responsibilities on the Governor’s Council, she enjoys spending time with family spread over several states, cheering on her favorite sports teams, or traveling. She has traveled extensively including to international destinations. Brandy’s personal goal is to educate and advocate for disability in her words and actions and most of all by example. Brandy’s personal motto sums up the reason why she is an excellent candidate for the Lois Curtis award. “My motto in life is based on determination and never giving up. I believe all things are possible when focusing on the end result.” Brandy participated in the Partners in Policymaking academy for the Governor’s Council and graduated in 2009. This experience contributed to her appointment to the Governor’s Council for People with Disabilities three years ago, and she was recently appointed to serve a second term. Brandy was even included in one of the Councils’ March Disability Awareness marketing materials and a video promoting inclusion and equity. 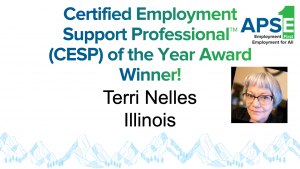 Terri has served as the ESPCC chair for multiple years. Terri has a passion for providing professionalism, credibility, and quality to Employment Support providers nationwide. She has demonstrated dedicated leadership with her contributing role with APSE. As for expanding opportunities for professional development, she has promoted CESP in-house at her current agency as well as to businesses, schools, and provider agencies in Northern Illinois. She also provides mentorships to new coworkers who are employment support professionals. Terri believes in the mission of Employment First and has been working in Community Integrated Employment for 20+ years. Her dedication to professionalizing the field has donated an incredible amount of volunteer hours to National APSE, and recently, Illinois APSE. 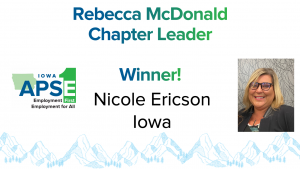 To honor Rebecca’s contributions to APSE and the employment of people with disabilities, this award is presented to an APSE Chapter Leader who demonstrates exceptional leadership, tireless volunteerism, and extraordinary commitment to the mission and vision of APSE within their state chapter.

Rebecca McDonald was a tireless advocate for supported employment and a dedicated friend and champion of APSE. Rebecca deeply believed in the principles APSE was founded upon and she supported and encouraged others to give and share resources to make those principles a reality. She was one of the supported employment’s greatest advocates and served APSE in various ways for 11 years as the founding Vice-President, President for three years, and was an officer for the APSE Foundation.

Nicole Ericson was nominated by the Iowa APSE Board, who shared that “Nicole brings excitement, energy, and passion to the work and the board. She works tirelessly in our field and while she may be tired, she rarely shows it. She has an unwavering passion and we’re excited to see her leadership as President of Iowa APSE. Nicole’s work as an Employment Administrator is also worth recognizing. She leads Exceptional Persons Incorporated’s (EPI) employment work in various communities large and small. She has experienced various models of service delivery and that strengthens her ability to see various sides of the work and increases her ability to promote individualized community employment.”

This year many businesses were nominated for the APSE Employer Award. This award was established to recognize businesses that value and demonstrate the importance of an inclusive workforce by employing people with disabilities. Nominated businesses have values consistent with APSE. 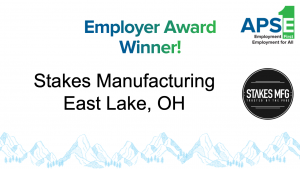 Stakes Manufacturing is a people-driven, full-service Print on Demand company in northeast Ohio. Co-founders, Jed Seifert and Vince Bartozzi, have led the business transformation over the last 2 years to truly embrace hiring, training and developing job seekers with disabilities. What started as hope, quickly became a multi-year vision, and was realized into an embedded practice. After learning the basics of Customized Employment from Jed’s connection with SEEC in Maryland, Stakes adopted a plan to source talented people with disabilities to fill much needed positions. Stakes started to work with local employment providers to fill positions and create a more inclusive culture. In 2 years, Stakes has hired 12 individuals with disabilities and launched a school-to-work training program with the local vocational district.

Jed, being from Maryland, also wants the work being done in Ohio to make an impact back home. As a board member of SEEC in Maryland, he is dedicated to working with their employment team to ensure this initiative takes hold. He is more than willing to walk alongside our agency to “sell” the concept, and be a partner with curious organizations. To date, because of his local networking, SEEC has been able to realize close to 10 jobs across an array of businesses. In addition, Jed is a board member of the National Fragile X Foundation and an active member of the National Down Syndrome Society’s’ CEO Commission for Disabled Employment, where he champions these inclusive practices to like-minded business leaders across the nation. 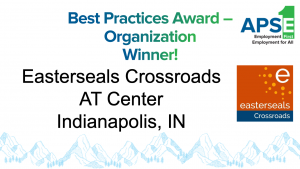 This award is to recognize a provider organization that has successfully implemented strategies to support those with disabilities to work and further their career path in an inclusive workforce.

The 2022 Best Practice Award: Organization Award goes to… Easterseals Crossroads AT Center, in Indianapolis, Indiana. Nominated by Jonathan Kraeszig with IN APSE.

With creative solutions and out-of-the-box thinking, Easterseals Crossroads AT Center has helped many individuals with significant disabilities and their employers create more disability-inclusive workplaces throughout Indiana. The AT program works to provide what’s needed to meet unique individual goals.