Rockville, MD — March 23, 2018. APSE’s (Association of People Supporting Employment First) National Board of Directors has selected Jenny Stonemeier, the organization’s Interim Executive Director, as its new Executive Director. As the Executive Director she will be responsible for overseeing the national office and its work with its 40 state chapters and members from all 50 states.

“Equipped with strong empathy, years of experience, as well as a Master’s Degree in Child and Family Law, Jenny is abundantly qualified and well-suited to lead APSE,” said Derek Nord, President of APSE National Board of Directors and Director of the Indiana Institute on Disability and Community at Indiana University. “I speak for myself as well as the entire board, we are thrilled to have Jenny’s know-how and expertise leading APSE as the organization continues its advocacy for inclusive workplaces and work with state and federal government and business leaders to increase the employment opportunities for people with disabilities.” 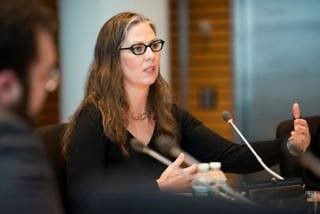 Jenny has been serving in the Interim Executive Director role since September and as Deputy Executive Director since January of 2017. In this time she has demonstrated the ability to develop new opportunities for the association while continuing APSE’s efforts to advocate for inclusive workplaces for people with disabilities in every sector of employment. She comes to this job with an extensive professional and personal background advancing policies and practices that affect people with disabilities.

ASPE and the professionals it represents have difficult and important tasks ahead, from dutifully protecting the Medicaid funds and services to navigating the transformation process from segregated to community integrated employment – all to better serve individuals with disabilities, their families, and their communities. In her new role, Jenny will lead marketing and communications efforts, manage day-to-day operations and extraordinary events such as APSE’s annual national conference.

Jenny has spent her entire career working alongside and on behalf of people with disabilities, their families, and communities.  After 12 years as a music therapist and of increasing frustrations with systemic barriers to inclusion that her clients faced, she received a Master Degree in Child and Family Law from Loyola University Chicago—School of Law and found her professional home in the advocacy world.  Jenny has worked as a private advocate for families, a Project Director at the Wisconsin Parent Training and Information Center, and Director of Education Policy at TASH and the SWIFT Center.  In 2016, Jenny’s policy work with the SWIFT Center was honored by the Zero Project—an International NGO monitoring the implementation of the Convention on the Rights of Persons with Disabilities.  Jenny brings her skills as a writer, speaker, facilitator, trainer, and leader to her role at APSE.  Jenny is also the mom of 2 school-aged kids, her 16-year-old son is on the Autism Spectrum.

The Association of People Supporting Employment First (APSE) is the only national membership organization focused exclusively on integrated employment. Through advocacy and education, APSE advances employment and self-sufficiency for all people with disabilities.