Dave Hammis was an incredible innovator in the field of community-based and customized employment.  His creativity and fresh approach to supporting people in inclusive workplaces---whether at a business or through self-employment---inspired many of us to see beyond the realities of what we thought possible.  To honor his contributions to APSE and to the overall field of customized employment, APSE has established this award.

This award honors Dave’s contributions to APSE and Employment First, this award is offered to individuals or organizations who demonstrate innovation in the area of technology, customized strategies, and/or self-employment for individuals with significant disabilities.

This year, APSE is honored and humbled in recognizing the contributions of the 2020 nominees and winner, Gail Fanjoy!

The Dave Hammis Innovation Award was presented on July 21st, 2020. 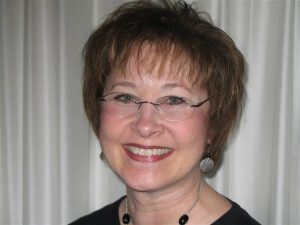 Like Dave, Gail Fanjoy has been an innovator her entire career. From the small rural town of Millinocket, Maine, Gail and her colleagues have led the way in ensuring that Maine citizens with the most significant impact of disability have valued lives in inclusive communities. Their innovation has been specifically noteworthy in the area of customized employment, including self-employment.

Gail is retiring after 43 years in leadership positions at KFI, including the last 8 years as CEO. It seems a most opportune time to recognize her immense contributions and the impact she has had over her career. In that time, KFI closed its sheltered workshop and day program (in the 1980s, mind you, long before others took such bold steps), as well as its preschool and school programs. Their steadfast belief that where you live determines what you do during the day caused them to expand their supports to include home supports, an unprecedented service in Maine at the time. Gail has served as a subject matter expert in provider transformation for ODEP, has conducted workshops and trainings, and presented across the country.

Again, like Dave, Gail has been an incredible innovator in the field of customized employment and community supports. And, like Dave, Gail’s creativity and fresh approach to supporting people in inclusive workplaces---whether at a business or through self-employment---has inspired countless numbers of individuals, families and providers across Maine and the nation, allowing them to see beyond the realities of what was thought possible.

An Example of How Innovation Was Used to Support Employment

Through Gail’s shared leadership, guidance and innovation, KFI has assisted “Benny” with taking a hobby of collecting trading cards and turning this gentleman’s interest into a unique customized self-employment venture generating both local and online sales. Gail advocated for this young man to have access to funding which allowed him to purchase an extensive collection of cards, directed discovery efforts to identify technology and staffing support needs and has remained a guiding force in this gentleman’s progress and growth. Through her positions as Director of Development and then as the CEO of KFI, Gail has effectively directed the actions of others in instances such as Benny’s but moreover has consistently taken a personal, enthusiastic interest in similar ventures of others served by KFI. Gail has been a “can do” beacon for others at KFI involved in developing unique vocational alternatives for individuals served by the agency, regardless of their challenges.

That KFI has a revolving loan fund to support self employment is a direct result of the work Dave Hammis and his colleagues at GHA did to create and disseminate creative ideas for financing.

Nominated by the Maine APSE Chapter

Lisa Worthington was working in customer service in a dental office in Ohio when she decided to pursue her dream of obtaining a degree in social work. The time was 1998 and she was a single mom raising 2 young boys on her own. She was then a participant in a program to help individuals living in lower socio-economic circumstances learn job-seeking skills and locate employment. 21 years later, she not only started out in that job search program with Carey Services but has now been the go-to lead for the employment services department for over 2 decades.
Lisa has literally provided employment skills training, information, and support to thousands of individuals. Her employment specialist journey began with individuals who were required to participate in the IMPACT program prior to it being privatized. She also worked with youth in the TANF youth program and WIA youth programs at Carey Services, balancing caseloads of over 200 to 300 people at times. When those programs ended, she began to focus on working with individuals receiving assistance through Vocational Rehabilitation. 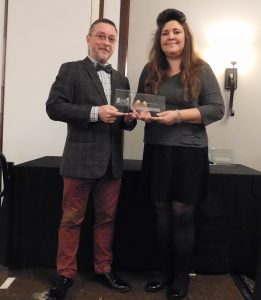 An Example of How Innovation Was Used to Support Employment

Lisa has developed workshops and training curricula independently and with team members, including topics such as work culture, communication in the workplace, resume writing, job search skills, retention skills, working with specific disabilities, effective ways to reach goals, hygiene, money management, and many more. She has trained countless other professionals in support roles from working with youth with no work experience to adults needing a professional career change. Lisa has held leadership positions within the Grant County Social Services Council, as well as being a trained BIN Liaison, employment specialist lead, IN-APSE board and conference committee member, and part of the train the trainer program with IIDC in mentoring other agencies in best supported employment practices.
Nominated by the Indiana APSE Chapter 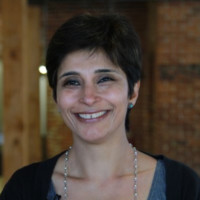 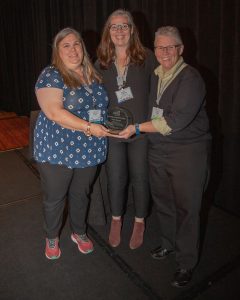 This photo displays the Dave Hammis Innovation award being received on behalf of Aarti Sahgal, 2019 Winner.

Since founding Synergies Work in 2017, Aarti's organization has served as a platform for talented artists and innovative service providers with disabilities to turn their passions into a sustainable business. Through networking breakfasts, mentoring opportunities, business boot camps, and financial literacy courses – Synergies Work equips entrepreneurs with the tools they need to build and sustain their business goals. In addition to these supports, Synergies Work also hosts an online gallery that markets, promotes, sells and delivers their entrepreneurs work to a global audience. There are currently 12 entrepreneurs represented by Synergies Work and countless more who attend their small business events. These individuals represent both the intellectual and physical disability communities but they do not define themselves by those labels. Through Synergies Work they are defining themselves by the gifts and passions they've chosen to build careers from. The wealth of talent working with Synergies Work includes painters, sculptors, illustrators, digital archivists, jewelry artisans, radio personalities, and accessibility consultants.